While Levi Giese and Jacinta Simpson didn’t meet AT the YAG, they certainly met at St. Gertrude’s here in West Chester. Raised Protestant, Levi had come for the Vigil of Pentecost with his brother Matthew shortly before the first YAG in 2016, and his reaction to Catholicism after that experience was: “Where do I sign up?” Very shortly afterward he met his future wife there, too. 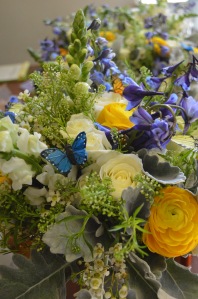 As Fr. McGuire termed it so aptly in his sermon at the wedding, it was a “Courtship in the Courtyard.” The pair were frequent sights around the church, attending daily Mass, praying, and helping in a variety of ways. They attended the second YAG as a couple and got engaged on February 18, 2019 – the same day Jacinta’s friend Katia Holbrook, also of the YAGs and St. Gertrude’s, got engaged to fellow YAGer Anthony Ruegemer from Minnesota! (Yes, they’re our third YAG wedding.)

Levi and Jacinta were married on July 27, 2019 at St. Gertrude the Great. The wedding party was made up of siblings of the bride and of the groom, with additional siblings (and parents) serving and singing in the choir. The brother of the bride, recently tonsured, was able to fill the role of subdeacon. The choir was swelled by so many friends who spontaneously decided to join in that it barely fit into the back corner around the organ!

Jacinta made her own wedding dress with the help of a dressmaking friend, and her mom, future mother-in-law, sisters, and friends pitched in to help sew (what felt like) the miles of lace around the bottom hem. Another friend made the cake, another friend did the flowers, another friend took the pictures, another friend directed the choir – and it was a lot of fun for everybody! The reception was held in Helfta Hall of YAG fame, featuring the now-traditional white Christmas lights (yes, we left them up after the YAG this year – saves work!) 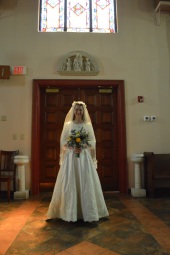 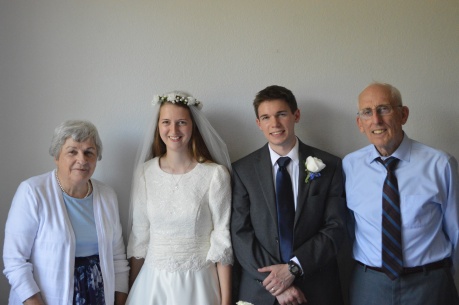 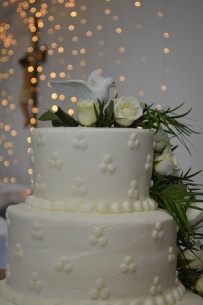 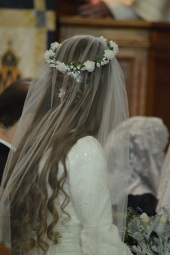 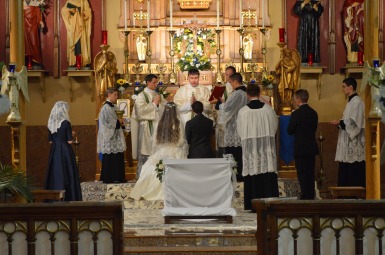